(or, Plato tells the allegory of the cave inside a cave)

Hoepker’s image is a study in juxtaposition. It communicates its message through a strong understanding of the psychology of human perception regarding colors and flow. 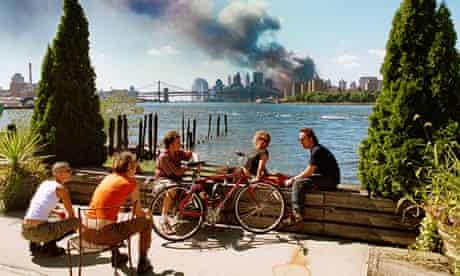 People naturally look toward the center of an image first (unless there’s a striking color or shape that is wildly different enough to pull our eyes to it due to the phenomenon of salience). So it is with this image: First, one looks toward the center and sees a woman near water seemingly accompanied by two men (noticed in our peripheral), but she has some object near her that is different from an anthropomorphic shape—a bike; then, are eyes are very quickly drawn downward from the bike toward the woman in orange, as her shirt color is so vibrant compared to her compatriots; next, we see the man kneeling in a white, cut-off tee. If one looks long enough, it is only then that we realize the destruction occurring in the background. The cloud of smoke is a muted grey, so it does not pull our eyes, and as it rises skyward we can mistake it for clouds. The foreground—friends all looking at each other and seemingly smiling (or is that just one’s mind adding features to a face that can’t be clearly seen?), reclined in leisurely poses, looking in all directions except for towards the destruction)—with its stark contrast to the background seems to convey this message:

“We are not aware of the chaos that exists in the world. Many are in privileged positions and distant from those who suffer, ignorant to what pain may await even when it is at our doorstep. At best, it is a message saying “we are ignorant of the chaos and pain around us”, at worst, the message is “humanity is callous to the suffering of others, and is prone to let them eat cake.”

And because of the flow of how the picture is read, the viewer is also made to be complicit in this action by viewing the destruction in the background last—as an afterthought—so the photo doesn’t just cast judgement on those photographed, but on the viewer as well, and thus a statement about Humanity in general: You, too, are complicit in the callousness.

The problem is that the photo is one moment in time—divorced from context. As another famous photographer, Eddie Adams, says, “Photography by its nature is selective. It isolates a single moment, divorcing that moment from the moments before and after that possibly lead to adjusted meaning,” (Adams).

Is the woman leaning back leisurely in recline? Or, was she previously laying down, has just looked behind her, and is now trying to rise to alert her peers to the commotion?

One response to the photo comes from Slate:

“Ask yourself: What are these five people doing out on the waterfront, anyway? Do you really think, as Rich suggests, that they are out for “a lunch or bike-riding break”? Of course not. They came to this spot to watch their country’s history unfold and to be with each other at a time of national emergency. Short of rushing to Ground Zero and digging for bodies, how much more patriotic and concerned could they have been?” (Plotz).

In fact, the man in the white, cut-off tee wearing sunglasses, in the photo, named Walter Sipser, even states, they were all “in a profound state of shock and disbelief,” (Jones).

History is full of examples of “lying” photos in this manner. Eddie Adams famous photo, “Execution of Nguyễn Văn Lém”, has often been shown as a photo showcasing the brutality of war. 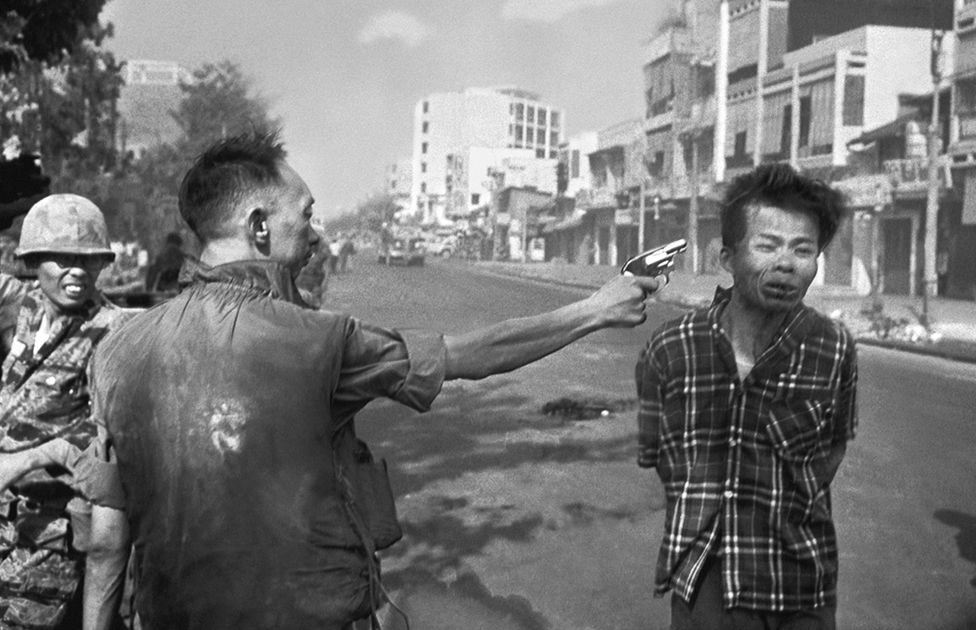 However, as brutal as the photo is, many read the photo with sympathy toward the man being shot. His painful grimace, and the stoic demeanor of the executioner, Nguyễn Ngọc Loan, make the viewer naturally percieve Loan as the antagonist and Lém as our martyred protagonist. However, the man being executed was a Viet Cong soldier who had just killed a man, the man’s six children, and the man’s grandmother by slitting their throats. The photo was so powerful that is almost resulted in the deportation of Loan from America—but president Carter, and the photographer, brought up the context of the photo, and Adam’s even testified in Loan’s favor (BBC). Clearly we can see that iconography, the visual language, is prone to miscommunication.

Of course, this phenomenon is not only true of pictures, so Plato is incorrect to assume that relying on language is an anodyne for such illogical thoughts, and in thinking so may be more blind to the same shadows cast on the cave wall by language. George Orwell knew well the power of euphemism, and simply reading two news reports on the same event can create very different pictures without the need for actual pictures. Even apart from journalism, verbal communication in the arts can be used to communicate ideas that are “a long way removed” from Plato’s truth. Orwell states, “It is not certain whether the effects of totalitarianism upon verse need be so deadly as its effect on prose…A poem is an arrangement of sounds and associations, as a painting is an arrangement of brush marks…poetry can evens dispense with meaning altogether,” (Orwell). 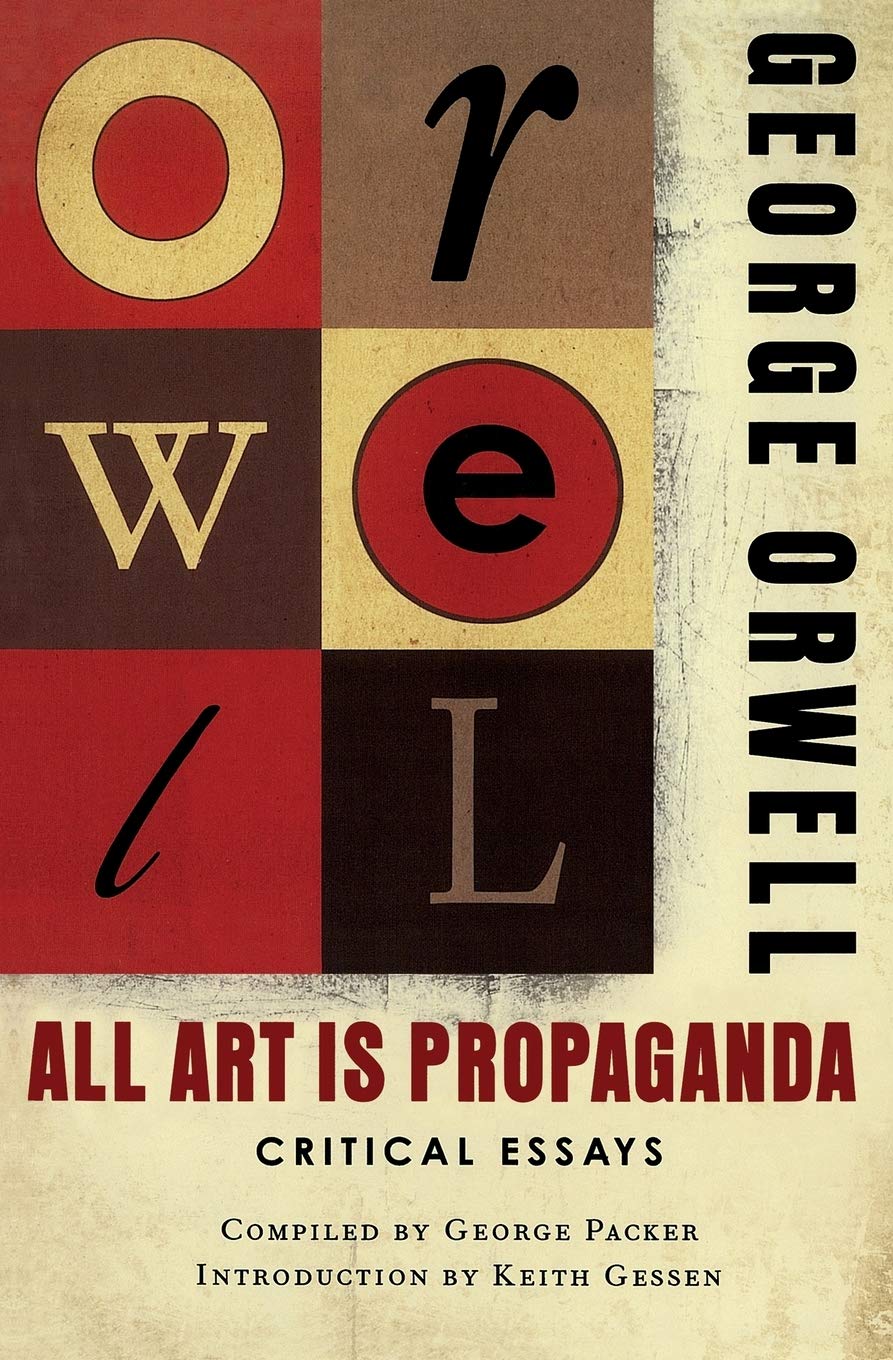 Author Milan Kundera seems to suggest a step further: that romantic poetry is itself a tool for totalitarians and all those who wish to eclipse thought with the cult of the collective in his novel Life is Elsewhere. And if Kundera was not just a novelist but also a poet, then both poets and marketers agree that poetry, the arrangement of words into a way to cause an emotional response to a reader, is just propaganda. Poets and copywriters overlap (Tang), they used words to convince you of something, whether it was the greatness of the church, or a certain man, or even one emotion over another. What is William’ Wordsworth’s “The World is Too Much With Us” but an “ad” for nature and against industrialization? Just the same as a photo like this: 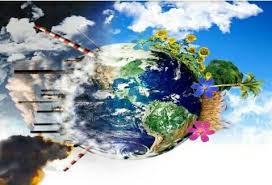 Just the same as a well-researched essay with citations like this:

Plato is not wrong that visual language can lie, and that it lies easier than text. But he is wrong that it is the only lie, and in thinking that iconography lies but that language (spoken or written) communicates the truth is a more dangerous trap of hubris for the philosophers. The only way to know truth, in any form of communication, is to analyze the information, analyze our thoughts on the information, and put the information in context with other information.

Socrates said that he was wise because he knew that he knew nothing. Plato, in his judgment of language over images, seems to have forgotten what he doesn’t know, and as he tells stories of men in a cave watching the images on cave walls, we must wonder about where the story teller himself resides…